Microsoft has a term "knowledge base article" which solves a particular problem or at least describes it better.
It comes out, there's a term http://en.wikipedia.org/wiki/Knowledge_base

Today was the second time I use the blog as a knowledge base. I know I have stumbled upon a problem, I think I wrote about it, I search the blog - there it is, and it solves my problem again.
Great, another usage of the seemingly useless blog.

Saturday evening it was under attack.

I use Tomcat's manager console to drop applications from time to time and I had it's password pretty simple. Within this console a new java web application may be installed.
What's even worse is that that Tomcat instance was running with pretty high privileges.

It was a test machine, only a few guys knew the address.

So using this console a trojan was inserted. The admin password was changed. This trojan might have succeeded if it weren't for the antivirus that got the trojan on time (yes, it was a windows machine).
The trojan is called TROJ_DELF.BDG and it was deployed in webapps/fexshell/init.exe

Now the tomcat is running with pretty low privileges, the port is not so obvious, and the manager password is changed.

I did not know that.

This is what javac says:

How stupid is this?
Is this why omitting package is deprecated?

The last couple of posts look terribly in Internet Explorer 6. There are some background rectangles that should not be there:

Update: Maybe it's because I used Word 2007 to write the html for the colored code from Eclipse.

I had an issue compiling some java classes. Javac failed, Eclipse's compiler worked. The issue is described here.
I was blaming Eclipse, I was blaming java6's endorsing. I was thinking it was due to JAXB.

It comes out they all were innocent.

The result with javac is:

After some research I think I simplified the problem:
(If I continue to simplify it would still fail to compile but at some
point it would start to compile which yesterday drove me crazy.
This is the most simplistic case that consistently fails to compile)

All of these changes fix the compilation error (from javac):


// Reverse the order of imports

This all makes me think that the static import fails the next one only if the next one is an annotation (I've tried with a java.util.Collection - it compiled).
I have tried this with jdk6u3 and jdk6u10.
I don't have jdk 1.5. Can someone test it on jdk 1.5?

Here's what they say:

I have some code.
I have two classes. They both have inner enums.
The two inner enums have an annotation.

But one of them does not compile. The other one compiles just fine.

In eclipse there's no error, but when I build the code from ant I get a compilation error - the annotation class is not found:

I spent some time looking for it - I thought that the classpath is wrong, I endorsed an updated version of the API (java 6). The issue persisted.

Then I decided to use javac directly:

Strangely enough I got the same error?! Then I did the same for the class that did compile successfully using ant - it worked.
So there was a difference between the two classes and I had to find it.

And I found it, can you find it?

Yes, you're correct. The second enum is not static.
This only happens with inner static enums. The anomaly does not occur if it's an inner static class. I don't know why.

So I'm thinking that in the ProblematicClass the annotation is not visible because the import of XmlType is not visible.
I was correct - this one works:

I just supplied the FQN of @XmlType.

So eclipse is working, javac is not. Now is the time to say that Eclipse is not using javac. I thought it was using jikes (made by IBM), but that's not correct. Eclipse is using its own incremental compiler part of JDT Core. JDT stands for Eclipse Java Development Tools.

JDT Core is the Java infrastructure of the Java

So either javac or Eclipse's compiler is wrong. I would bet that javac is following the spec more strictly.

This is the second time I'm catching Eclipse's compiler of misconduct. The first time was something related to a very complex case with generics - one of the compilers said it was a warning, the other - error.

Update: I was wrong. I was trying to report the problem. I was making a pretty simple case. I used a different annotation: @javax.annotation.Resource. It worked both on Eclipse and on javac.
So the problem is somehow linked with JAXB.

JAXB is an API bundled with Java 6 (an 'endorsed standard' a 'standalone technology'). The version bundled was JAXB 2.0. If one wants to use a newer version, say JAXB 2.1, an 'Endorsed Standards Override Mechanism' had to be used.

It looks like the problem is more on javac side than on Eclipse's compiler.

I will investigate further.

Update2: It comes out that 'Endorsed Standards Override Mechanism' was existing prior to java 6. Only the standalone technologies were added in Java 6.

Update3: It comes out that 'Endorsed Standards Override Mechanism' is still used.

Update4: It comes out that this bug is very hard to reproduce. My simple examples at some point just started compiling 🙁

Update5: I just created some code that consistently reproduces the bug. I'll write it in a new entry to be cleaner.

Update6: I fixed coloring and finished the new article on the bug.

I'm using JAX-WS.
When I'm generating stuff for a web service I generate the jaxws package in a 'gen' source folder.
I don't need the compiled stuff so I generate it to a temp folder that I don't care about.

It comes out that I do have to care about that folder because yesterday I got an obscure error:

com.sun.xml.ws.model.RuntimeModelerException: The serviceName cannot be retrieved from an interface.

This error has only 1 (one) hit on Google. Don't trust me?
Try this one out:

The use case in the forum has nothing to do with my environment so I cleaned up and everything worked like a charm.

I've always been unhappy with how production unready wsgen is (here). 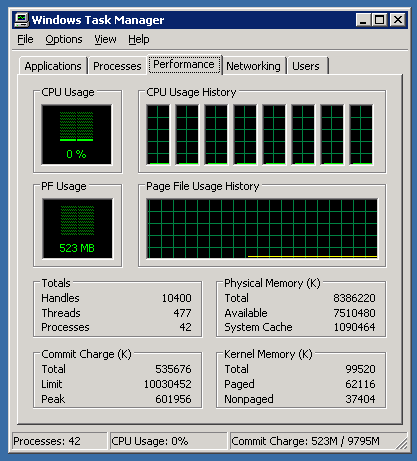 Recently I had to move 200GB from one hard-drive to another.
It was imperative to make sure everything was copied successfully.

Using a binary comparison tool would take a really long time. So I only check the total file size of all files copied and the number of files.
I tried copying these 200GB files several times and never succeeded. I was too lazy or busy to investigate until today when I got really pissed off.

It comes out that the difference comes from thumbs.db files.

Thumbs.db is a thumbnail cache used by Windows XP and Windows 2k3 Server.

How to stop the creation of these files:

Those who would sacrifice liberty for security deserve neither.

I accentally went to http://www.gaijin.at/.
The weird part is that when one presses "English" (since it's in German) it goes to:
http://translate.google.com/translate?hl=de&langpair=de|en&u=http://www.gaijin.at/index.php
I didn't know that Google can translate whole web sites.

The translation seems to be pretty good.
The site look&feel is exactly the same.