I hate getters and setters in java. Half of my code is filled with them. They are pointless boilerplate code that says nearly nothing. 99.9% (I made that number up, but it sounds reasonable) percent of the cases they don't have any additional code in them.

And it is really hard to see whether a variable is read-only/read-write/write-only. You have to find the getters/setters to see that.

I have a notation where I put all the modifiers at the end of the class and separate them with a page of whitespace.

I don't like the C# solution - it's not really shorter, only binds the getter and setter together.

I have a proposition: use annotations:

And one wants to write extra code, one should be able to use the old notation. The compiler will check for collisions.

I don't see any reason why this cannot become the next syntactic sugar in java where one saves a bunch of useless code-writing.

Suppose you would like to have firefox 3, 4 and now 5 simultaneously. Unfortunately renaming applications is not possible via Finder.

Suppose you have firefox3 installed. Do the following:

Then install firefox4 and do that

Install firefox5 and then:

Now you would have all three versions:

The even show up correctly in Applications tab: 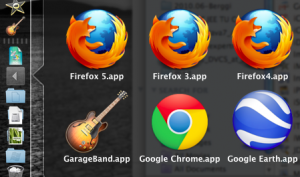 (I messed up in renaming and Firefox 4 is actually Firefox4)

Note: unfortunately you cannot launch them simultaneously since Firefox has a mechanism to check if it is already running.

This is a note-to-self. So when I forget the solution I can come back here and find it.

IntelliJ IDEA is one of the best Java IDEs. More here.

I have had the problem of not being able to save the password of a test svn repository. I found the solution:

This is a presentation I just gave on Bulgarian Java User Group (BGJUG). The topic is Distributed Version Control Systems (DVCS). The main DVCSs mentioned are Mercurial and Git.

Btw, consider it absolutely free. But if you mention my name I'd be grateful.