So we in the Bulgarian Java User Group wanted to build Valhalla, and no IDE (Eclipse, Intellij Idea) supports it. We needed some simple text editor with some java support. And Sublime Text 3 (with Javatar) is the one we chose.

Sublime is a fancy editor written in C and Python. Javatar is a plugin that adds some Java support. 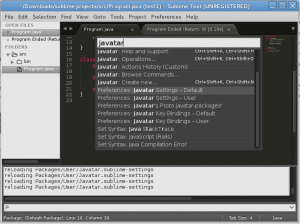 Then change the javac and java locations: 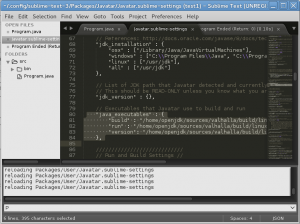 Creating projects is a bit uneasy - create new project is actually called "Project -> Save as".

And then we can run some code (fist compile, then run): 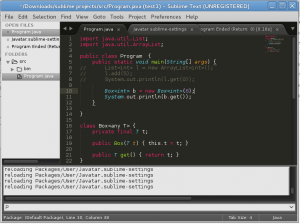 Today we had a second bgjug hackaton for the month. Its topic was Valhalla.

Here's how you can build Valhalla yourself.

Here's a virtual machine with valhalla if you're lazy (virtual box).

This is the valhalla presentation by Ivan. And this is the video of the talk (in Bulgarian). 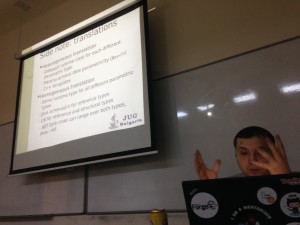 Here are some of the code we ran:

Nayden tested a bit of crazy code - which is supposed to fail (IA impl = new IAImpl();):

This is a tiny tutorial on how to build your own copy of OpenJDK 9 from the current sources.

Install brew or macports. I prefer brew. Both are package systems for OS X.

ccache is a compiler cache - speeds up the build.

We need them so we have a C compiler and other tools.

Get the sources, in the console type:

Takes 10-20 secs. This downloads basically a couple of scripts that we will execute to get the actual sources.

Now we execute the script we downloaded:

The last command can can take 10-20 minutes depending on the connection speed. 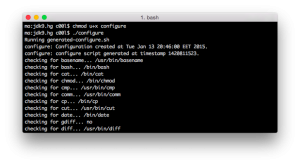 The second command took a bit less than 20 minutes. The first command is fast.

The result: we have this created:  build/macosx-x86_64-normal-server-release/images/jdk/ - this is the built OpenJDK 9 - SUCCESS.

jtreg is a "testing harness" (whatever that means) made specially for OpenJDK. We need it to run the tests written for the OpenJDK

Download from https://adopt-openjdk.ci.cloudbees.com/view/OpenJDK/job/jtreg/ (not the Snapshot version, the other one).

unzip in jdk9, so we have jdk9/jtreg.

The official instructions suggest we edit ~/.bashrc. I don't like changing global (for your user) settings, so we can put these settings in jdk9/.bashrc

NOTE: Change /Users/steve/jdk9/ with your folder on the top line.
NOTE: Check the correctness of PRODUCT_HOME too.

To execute this file, do: 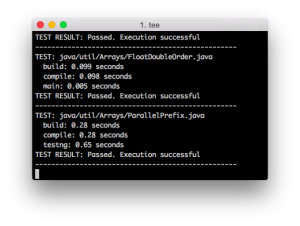 Webrev crawls over your changes to generate a set of web-based views of the differences in your code. The different views allow reviewers to easily look at your proposed changes, selecting the appropriate difference format based on the type of file, the type of change, and their own preferences.

To prepare a webrev, make some changes. For example in the jaxp folder. Then we commit locally in the mercurial repo.

It will prepare a webrev/ dir and webrev.zip. The folder is then uploaded somewhere and sent to the appropriate mail list inside openjdk. Example:
http://bgjug.sty.bz/bgjug/~bgjug/fix-warnings-jaxp-part1/webrev.00/

On a linux/unix/osx box we start with:

Notes: List is still not parameterized with because ... issues.

So we had a hackaton a month ago to fix a bug in the OpenJDK. Today we continued with the fix - using streams, benchmarking different solutions, and prepared a patch to send to the jdk team. 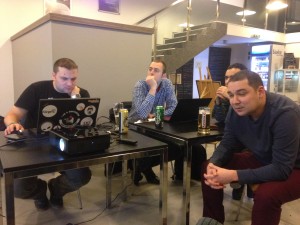 in the console, a similar window appears: 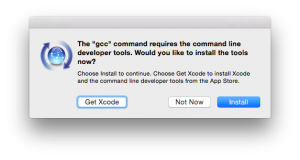 Dmitry blogged about how to setup IntelliJ IDEA for Nashorn.

Dmitry is part of the Bulgarian Java User Group (BGJUG).

He was mentioned in Oracle's official Nashorn blog. 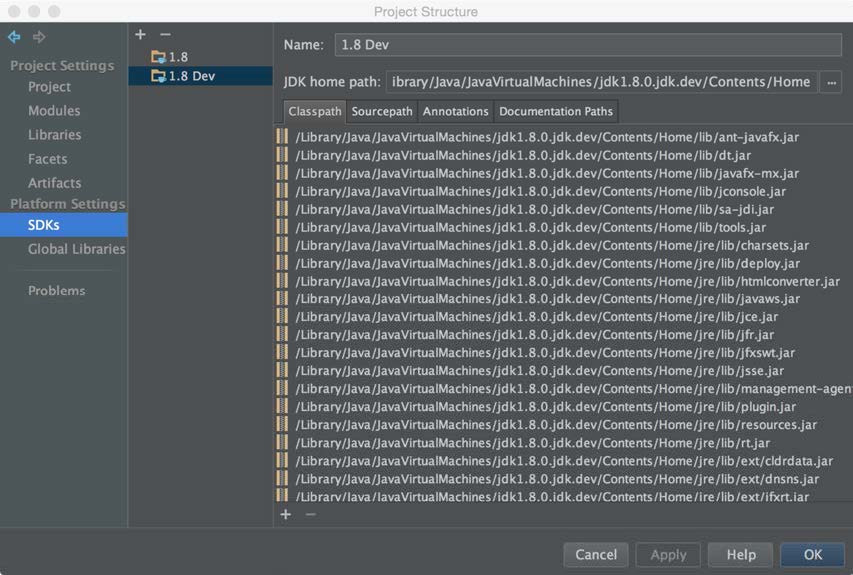 In life there is no Save/Load option. When you mess things up, you can't go back.