So, jprime.io is over, let's see how well we did: 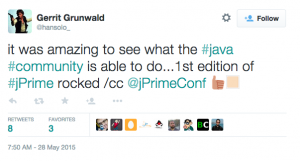 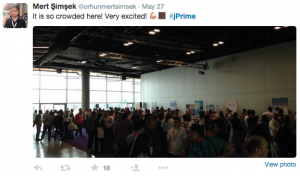 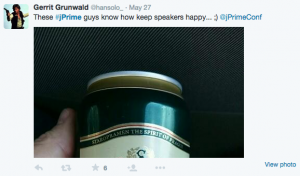 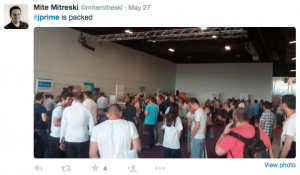 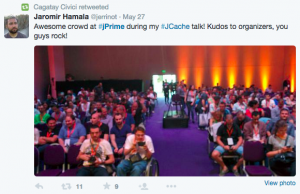 Also in my inbox:

Translation: Basically Phillip is saying we are the best java conf here.

Translation: Stef is saying it was nice that people communicated and that the atmosphere was friendly and the feeling altogether was cool. 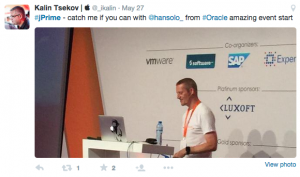 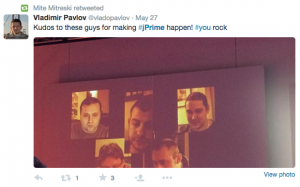 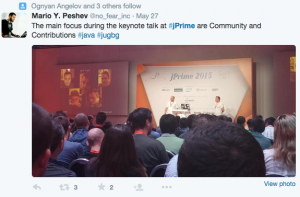 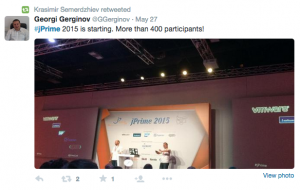 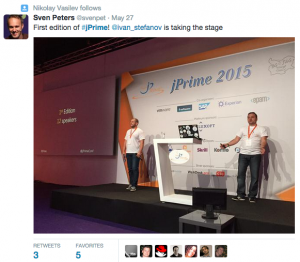 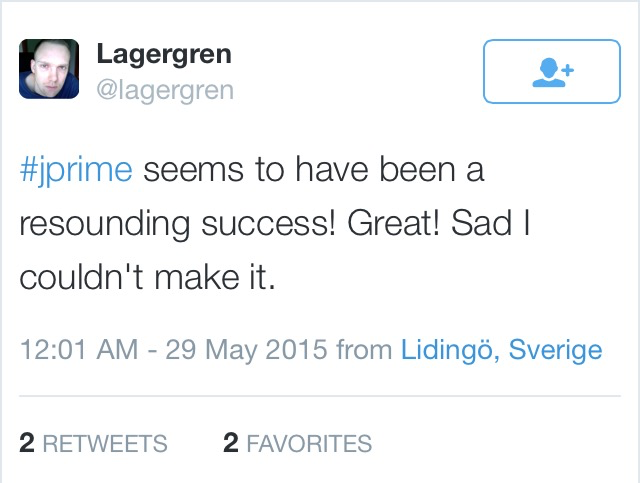 I think we did well.

Every morning I wake up to this:

. Every day I wage a fruitless war to go down to zero on both fronts and I fail miserably. But I'm getting better.

Recently we managed to "inject" a company as a gold sponsor after all the deadlines have passed. We did it in 20 minutes after 6 phone calls.

The server firewall failed. Someone fixed it on a Saturday morning.

Our invoicing architecture after so many patches fails to follow all the complex branches of the process of issuing an invoice. We somehow manage to still use it fruitfully. And I have big plans for rewriting most of it.

ePay integration was a pain it the ass. Very bad documentation, different undocumented services, support could be better. But it was fun encrypting and decrypting a ton of messages until we stabilized it. We even "support" credit cards (in a way).

Our Turkish speaker delayed his visa application. I called the Bulgarian embassy in Ankara. They were nice, didn't forget to call me back. Actually they kept me updated the whole time. And they issued the visa in less than a day. So kudos to them.

Go buy a ticket at jprime.io.

I remember when 8 months ago Ivan came up with the idea to organize a conference, we were all - why the hell not. How hard can it be? I want to go back in time and give my cocky past self a slap in the face. A very hard slap.

We had already done many hackatons, pushed a couple of openjdk patches (which are as of now still not accepted) and drank many beers planning the bright future.

I remember feeling a bit in a rut. And this was a really good excuse to write some java code, meet new java people and work with some new java technologies.

I remember when we just talked about the conference for four months. It all got very real 4 months ago and we had a choice - organize the whole thing in 4 months (which then I had no idea was a really short time for a conference) or give up for next year.

We were very eager back then. We all decided to do it. I remember some of our organizers looking at us, probably thinking "let's sit and watch go down in flames".

4 months later I know a lot about accounting and VAT. I wrote a lot of code, most of the times after midnight. The funniest story is when we were deploying the electornic ticket system (epay integration) - proudly written mostly by me (but I'm ashamed of the code).

4 months later I can sign a contract in a couple of hours. A procedure previously taking me almost a week. I have optimized so many of the bureaucracy procedures I do. As a business owner I had the same issues, but after we started the conference I couldn't keep up and had to optimize again and again. Here's the place to send a special thank you for our lawyer and accountant - two of the people I would fail without.

4 months later I sleep less, and I do more. I hope the sleeping part will fix itself after the 27th. I now can read 30 emails in an hour (unfortunately after another hour I have 30 more). Half of my inbox has "Ivan" in the sender's field - he has the nasty habit of putting every little detail in an email, requires the same from me, and is pissed off if I fail to read something 2 hours after he sent it.

One of the funniest stories from the past week is me sitting in an office, signing a contract. The contract has to be signed, and I have to pay that contract in 10 minutes. So I'm sitting on my laptop sending the money, the other side sitting on theirs checking if the money is going to arrive. And at some point it feels as a movie scene where the good guy is going to appear any minute and break the drug deal.

So organizing a conference is tough, but it's a lot of fun. Next time (yes, if I have the opportunity, I'd do it again) it's going to be even better. My conference cherry is about to be popped in 27 days. Hope to see you there.

--Mihail S (and, yes, I know it says "by Admin", but we have more important things to fix first)

Simon Scholz from Vogella presented Eclipse RCP development, the new Eclipse Mars (to be published in a month) and tips and tricks on migrating from eclipse 3 to eclipse 4. 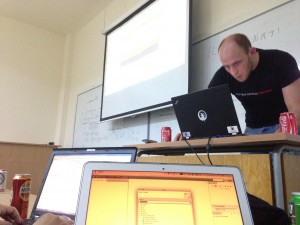 There were also examples on Maven Tycho, SWTBot UI testing. Simon bragged about fixing issues on the dark theme of Eclipse, which I adore, so now it's even better. 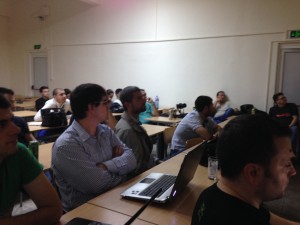 Pretty funny, I had to pick Simon from the airport, so I had to have a sign: 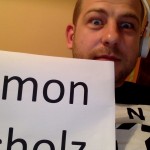