Sharing a folder via SMB (the so called Windows Sharing) with OS X is easy. But username and password were always required. I wanted to make an anonymous share and didn't know how. 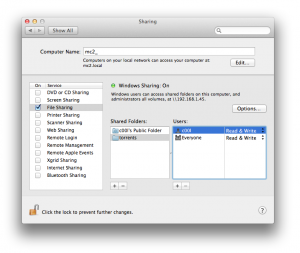 One can see the Everyone user added and still a password was required to log in. Accidentally I found the fix for that.

I had to enable the guest user for file sharing: 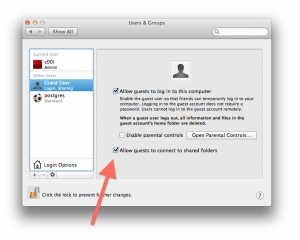 NOTE: The guest user is disabled by default in OS X Lion. You'll have to enable it first. 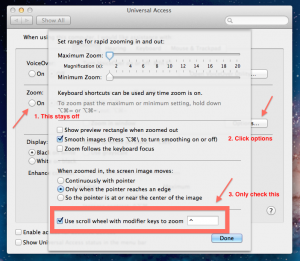 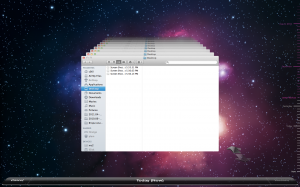 Mplayer is the best media player there is. It just is. One just downloads it and it just works, no codecs installation, no registry shit, nothing. It can navigate with the arrow keys (up/down, left/right, pgup/pgdn), it can open unfinished downloads, and can repair/redo their index and navigate while the file is still downloading - awesome. It's very lightweight.

It can play almost anything, no matter how broken it is. It comes with a console tool called mencoder that can encode stuff. It's very hard to use, but it works. It has a GUI for windows and mac os x.

The problem is that the development is a bit forsaken. Sometimes the GUI crashes, there a few bugs, the integration with the OS is not that perfect (I had issues with Vista effects and Mac OS X graphics cards switching)

I just found that the MplayerX (+GUI) is available in the App Store, perfect. The GUI is very slick. 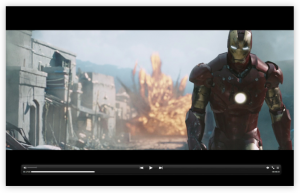 Options 1) and 2) require Xcode. Xcode is a large development package for OS X. It installs an IDE, compilers and unix tools. Options 1) and 2) use the unix tools.
I don't want to install Xcode, even though there is a way to limit it's memory footprint. Here's how (the question was with negative rating when I found it, but the answer is useful).
Anyway I don't want to install Xcode, and on my last OS X I only installed a couple of databases. That made the whole ports thing a bit useless.
So I tried the EnterpriseDB's installer. It failed with

The official sites said: Lion is not yet supported: link. I didn't want to install some package management solution so I wanted a solution.
I found one here. On a poker site - kill me now. It seems to be the easiest one. Just create a postgres user using the Users & Groups preference tab. Don't create a Sharing only user, it doesn't work with it - I tried. Create a normal user. Everything works like a charm: 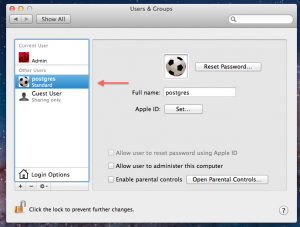 I tried the new postgres 9.0.4, but it failed with "invalid stream header: BB656430" when serving binary data from an import from 8.4.x. I went back to 8.4.x.
EntrepriseDB's installer creates an uninstaller, installs pgAdmin, works nice. User-friendly.