Now, here comes the fun part - how to fix it.

I logged with the other account (the one google claims is hacked) and I got a message similar to this one:

Weird. Google migrated to this security protocol without notifying me. I have this new application style log in on my primary account, but not on the "cracked" one.

I installed the "new" OS X - Mountain Lion - 10.8. This is the more un-hyped version of the operating system. The only usable features I found were Notes and Notifications sync with my iPhone, so far they work good enough.

Speech recognition integration is good. Recognition actually happens on an apple server which sucks especially with no internet connection.

Unsigned pkg files are harder to to install. An option has to be changed.

People say there are battery issues. I haven't tested.

OS X has a three-finger feature that translates or explains (depending on the dictionary) any word in any text. It has english dictionary by default plus wikipedia. 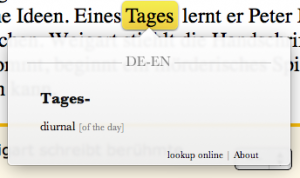 At some point I saw many items in my facebook timeline coming from some weird apps. So I go to settings and see this:

I have been getting this for a couple of weeks now. Facebook dudes, I know that by using your service I give you full control over everything I do and get no control over what you do with my info, but at least make me feel like I have some control.

This is far too unprofessional.

Most large torrent files (8-20 gb) take quite a while to download. Is there software for Mac OS X that allows me to watch them while downloading?

I tried all (I mean all) torrent clients for OS X that I could find.

There were people before me who wanted the same feature and have asked the most popular clients (uTorrent and Transmission) whether they would support serial downloading. Developers replied that that would defeat the purpose of torrent protocol (it would seem that uTorrent changed their minds and have such a feature for windows).

Finally I found one that could download file parts in order. It's called BitThief. It's a research project and has an awful interface. But it works, and most importantly downloads serially.

After the file is put for downloading, the speed must be good enough for watching. For example, if the movie is 1:30h long, I check the ETA time to be less than that.

To watch the movie I use MplayerX (an OS X GUI for mplayer). It can be downloaded for free from OS X App Store. Mplayer is light, can play EVERYTHING, and navigation is done with the arrow keys. Mplayer automatically regenerates the index (the thing that allows using the progress bar). The OS X gui is awesome and supports the Lion's full-screen view.

There's always a chance that things could go wrong - low speed or high speed in the beginning and then low speed (which is even worse).

Keep in mind that in order to watch a 1:30h long movie that is 20gbytes, you have to download with ~3.7mbytes/sec.

Update 2012.07.02: This solution has been serving me quite good. Still here are the issues: BitThief is not very optimized and while other torrent clients can utilize my whole bandwidth, BitThief fails from time to time, probably because it is downloading sequentially. Also magnet links are not supported and the interface sucks so much.

Update 2013.02.04: The newest version of BitThief now supports Magnet URIs. They're saying that a new look and feel is also coming.