At some point in a @ManyToMany relationship I had to add some extra columns in the join table (the middle table).

Here's what Gavin King says in Java Persistence with Hibernate (a notable book on the subject):

Adding columns to join tables
You can use two common strategies to map such a structure to Java
classes. The first strategy requires an intermediate entity class for
the join table and is mapped with one-to-many associations. The second
strategy utilizes a collection of components, with a value-type class
for the join table.

Later in that chapter for the first approach (the extra entity for the middle table):

The primary advantage of this strategy is the possibility for
bidirectional navigation: You can get all items in a category {...} and
the also navigate from the opposite direction {...}. A disadvantage is
the more complex code needed to manage {...} entity instances to create
and remove associations—they have to be saved and deleted
independently, and you need some infrastructure, such as the composite
identifier. However, you can enable transitive persistence with
cascading options on the
collections {...}, as explained {...}, “Transitive persistence.”

Later in that chapter for the second approach (the collection of components approach):

That’s it: You’ve mapped a ternary association with annotations. What looked
incredibly complex at the beginning has been reduced to a few lines of annota-
tion metadata, most of it optional.

Naively enough I chose the second approach. Who cares that there's a
hibernate dependency in my JPA data access layer. I already have a few
(a hibernate interceptor).

Let me give you an example - it will clear things up: there are classes
and there are students - two entities. There can be two classes with
many students some of which are the same - so the relationship is @ManyToMany. The extra column in the join table would the grade of the student in that class.

So the approach with the @CollectionOfElements works like that: one of the entities holds the relationship - let it be the class entity - so it has something like that:

Student is a simple entity, no code needed. Let's call the student with the grade an GradedStudent:

That's pretty much it. Seems simple, you would think and straightforward.

BUT IT DOESN'T WORK.

Here's what gets wrong:

Regarding 2: a quotation from the same book:

There is only
one change to the database tables: The {...} table now has a primary
key that is a composite of all columns, not only the ids of the two object, as in
the previous section. Hence, all properties should never be nullable—otherwise
you can’t identify a row in the join table.

Well, what if I don't want that? It doesn't say.

So, actually the second approach is not an option.

In a project that I mention a lot there's an persistent model using JPA as an interface to Hibernate.

There was case where I wanted to put extra columns in a @ManyToMany relationship. JPA cannot do that.

So I had to use the Hibernate's @CollectionOfElements.
It works like that: if there are the objects Class and Student, the extra columns go to the wrapper class EnhancedStudent. The EnhancedStudent has a property of type Student.

Now I have a few bugs related to it:

The funniest thing is that the documentation of the @CollectionOfElements is a single line:

CHEAP BASTARDS. For these prices you can at least provide a decent service - a VoIP call is with bad quality and the callee cannot see who's calling, he sees some service number.

BUT THATS NOT ALL.

The top of the cherry is that when Mtel is using VoIP they clearly cannot see whether the other side answers or not, so no matter whether you make a successful call or not - while you're ringing you get billed. That's not right, is it?!

I found out all that today while checking my bill. Two months ago while in Brno I made a call and was quite sure that I would get billed for that call even though nobody answered.

Update: other case of proved cheating:
Mtel made me pay 200 bucks for half a megabyte of internet while roaming. Before that I explicitly asked for the price. It came out that the price is 10 times more and they charge every GPRS session for a full megabyte (with 10 times the prices) without saying it.

Few months ago I caught them billing me for an international call to a friend I haven't spoken with for at least a couple of years.

Ctrl+Shift+T is a popular shortcut in Eclipse.

Ctrl+T is a popular shortcut in Firefox - opens an empty tab.

There are a lot of tests for some EJBs.

Starting an J2EE server is slow. I wanted to test the business logic faster.

Most of the beans reference only each other and a persistence context.

So what should the mock worry about - transaction demarcation and dependency injection. And... exception wrapping and unwrapping.

If I have some spare time left, I'll write some code.

Some of the objects get serizalized/deserialized (travel through a stream).

Now here comes the problem - the deserialization first sees the cyclic reference, makes instances of all the objects, initializes all the primitive fileds, does not initialize the other fields, then links the objects.

Here comes the problem, linking two objects (one of which has a map of the other) requires hashCode(). This requires some specific properties in that object that are not initialized - this causes NullPointerException (or in my case an AssertionError).

If the hashCode returns a default value if the properties are not there - another serious problem si caused - there are objects in the map in the wrong buckets - they entered the map with the default hash, but when they got completely initialized - they now have a different hash. I think that is really bad - the map has to be rehashed.

Here's what some of the guys say on the subject:

The problem is that HashMap's readObject() implementation , in order to re-hash the map, invokes the hashCode() method of some of its keys, regardless of whether those keys have been fully deserialized.

The fix for this is actually quite easy: Modify the readObject() and writeObject() of HashMap so that it also saves the original hash code. (I am currently using this fix in production code for a large web site.) That way, when the map is reconstructed, you don't have to recompute the hashcode----the problem is caused by recomputing the hashcode at a moment when it is not computable.

What you *give up* with this fix is that HashMaps containing Objects that don't override hashCode() and equals() will not be deserialized properly.

But, not all my object have a rewritten equals (of course I can check with reflection which ones do and which ones don't, but...). This would also mean that I'm using a customized collection.

There's another proposition - to hash the hashcode.

The fix for this is actually quite easy:  Modify the readObject() and writeObject() of HashMap so that it also saves the original hash code.  (I am currently using this fix in production code for a large web site.)

The hashcode is a primitive type, so it would get initialized first and the problem would be solved. This would mean to have an hashCode() and equals() which check which one is available - the cached hash or the properties - isn't that UGLY.

This is 73 meters from the ground. It is scary and physically intensive. I did this route twice, the first time without the special gloves. My fingers still hurt.

On the top the second time (on the verge of not making it). 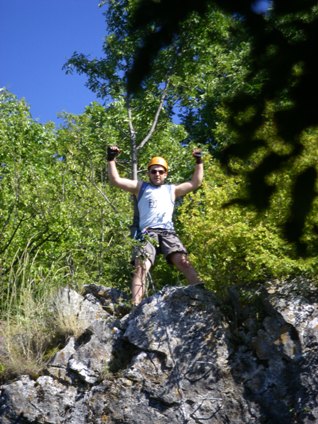 It's over, let's have something to eat. 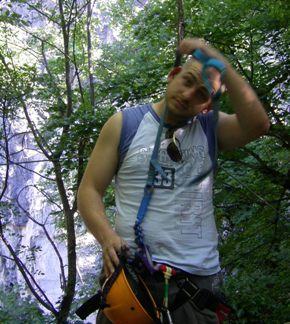 More pictures when I get them.

The first idea was to have the DB (MySQL) start as part of the script that launched the tests. Google couldn't find anything good. MySQL is one of the most unintuitive things I have ever seen, so the decision was to not try to figure it out on my own.

The next thing was to install MySQL as a service. That turned out to be difficult.

I tried to install MySQL as a service:

As easy as that. The problem is IT DID NOT WORK. The service did not want to start.

After some reading it came out that the RIGHT way was to do it like that:

MySQL, you are a disgrace.
MySQL, not only are you not a real RDBMS but you can't even start without making your users' life misserable.

Connection timed out on all their servers?!

Yea, it was difficult. So difficult that I had to extract the sources from a zipped project file, put them into archive and rename to jar file. And hope that the versions I'm using are mathing....

The JBoss jar says it's implemented by JBoss.
JBoss/hibernate-entitymanager.jar/META-INF/MANIFEST.MF:

However, the JBoss source does not have the sources.
http://repository.jboss.org/hibernate-entitymanager/3.2.1.GA/
WTF number 2?

In the hibernate downloads the source is missing as a separate download
http://sourceforge.net/project/showfiles.php?group_id=40712&package_id=156160
WTF number 3?

Finally, found it in the zip file in the last link. I was desparate, thinking of using the repositories here:
http://anonsvn.jboss.org/repos/hibernate/entitymanager/tags/
Had to extract it, re-zip it and hope the versions match. So far so good.

Why does it have to be so difficult?!

I want to override that api.org.hibernate.Interceptor#postFlush(java.util.Iterator)
I want to do it like that:

Does not work - the method is not with the same signature ?!

Does not work - the method is not with the same signature ?! WTF?

The only thing that does work (without a silly warning) is that:

How an iterator works:

Well, I want to move the red line in the loop init, so it would not mingle with the loop body where only business logic would reside.

Unfortunately that cannot happen. A for loop first inits the data, then checks the condition. With an iterator one has to first check if there are elements, then to get them.

And why would someone give you an iterator instead of a collection, my mind cannot understand. (org.hibernate.Interceptor#postFlush(java.util.Iterator))

JUnit spec (not very easy to find) states, that if there's an exception in the @Before method, the test is not called. True. BUT

JUnit spec does not state that in this case the @After method is called.

So the
real reason for the problem is lost. One will say - avoid exceptions in
the @After method - that's what I just did (and the real exception was
printed), but finding the reason for that was not easy and
straightforward.

This is the reason for the mentioned override. I hate when finally does that.

There's no such thing as a natural. A natural is someone who practices so much it looks like they don't need to.