On a recent project I joined I was amazed to see how things were working in regards to the IDE.

First, the environment was not uniform, there were:

So after some days on the project I proposed to make a uniform environment that would have automatic building and deploying.

Maybe
now's the time to give some info on the project: Web project including
ajax written in java, IDE: Eclipse. Lot's of legacy code and legacy
dependencies (which had to be removed).

So
first I had to separate web content from source code. This could work
with linked folders. So I created a few java projects with only the
source code.
Then create a new web project that depended on all the
other projects and had several linked resources for all the web
content. The hardest thing was that in an Eclipse web project one can
have only one folder that's gonna be the root one, vis à vie you can't
have two directories with web content that shall be deployed in the web
root folder. (At least it looks that way when one goes through the configuration of a web project)

After some research it appearred that actually this was possible (manually):
Web-project/.settings/org.eclipse.wst.common.component:

So after this was done the only thing left was to configure the deployment to different servers.

So the moral of that story is that even with a directory structure that complicated one could be able to abstract all that from developers and create an IDE that can do most common tasks automatically. 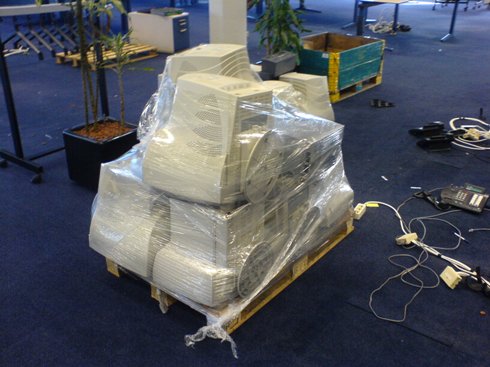 I just can't play this freakin' game. I hate it. At least today for a first time in my life there were 2 games at which I was NOT last. I don't care what you think - for me this is a progress. Even in one of the games I was 1 point from being second. And I'm playing with with a bunch of guys that can't do a 100. I really suck at this game...

What the F am I doing home on a Friday night? I'm just getting old 🙂

Lately (maybe even since I started the blog) I haven't written a technical post in this blog. Mostly I'm posting fun stuff (like the last one) or complaining about my fights with management (like this) or talking about life and the endless string of obstacles it puts when one strives for happiness (like this one).

Why's that? I don't know. Maybe writing a technical post requires more time than just the usual gibberish. Maybe I just need an outlet for the negative energy that I have. Maybe work is getting too much. God knows what else.

Anyway, I have some interesting technical things I wanna share, they waiting in the drafts, but need to be further investigated. I plan to do that sometime soon. I kinda, wanna liven up this blog, and not create yet-another-started-and-left-out-because-I-lost-interest-but-wanted- -to-try-out-in-the-first-place-because-it's-what-everybody-does-these-days blog.

Also I guess I'll continue to waste the time of everybody that reads this blog with the things that are on my mind, but, hey, it's a good place to channel out bad energy 🙂

I also noticed that I already have readers. Interesting. I didn't expect it. Haven't told a lot of people about it. Thank you for the attention 🙂

This is what I stumbled upon while working on my current project:

I recently realized that I want to be the moral winner of every argument. The price doesn't matter. I'm ready to sacrifice everything for it. I just feel better if I do win. I take personally every injustice in the world and sympathize with the victim and not the winner and I take it personally if the injustice is not righted.
... and I go too far. And when I go too far I start regretting for loosing it. Then I become too humble and people take advantage of it.

It's hard to accept a lost cause, so I fight them long after they're clearly lost. I guess my ego cannot accept failure. I guess I have an ego that's too big. (Did you notice how many times I started my sentence with an 'I' ?)

But at least I realize it, right?

Here's a good article on ego:
Are You an Egomaniac?
(read the whitepaper at the end - it's worth it).