First, what's big on the system

This shows a sorted list of the largest dirs in `/`
You can do two levels down:

I ignore /mnt (because that's an external drive)
Two dirs stand to mind: var and usr.
Let's see what's inside:

Then, a little bit deeper:

Let's start with the logs

I'm not a fan of deleting directories randomly, so let's do it the clean way:

More info here on how to configure journalctl here.

I have 660M /var/cache/pacman. It was 1.8gb, but I ran pacman -Sc to remove unused packages. Let's remove the rest:

A lot of users do remove it, or at least clean it up. But I might be a problem. But checkout bleachbit (next paragraph).

Automatic cleaner. Will delete a lot of stuff, but for it was mostly locales.

You can look for more stuff to delete:

My first fosdem this year. I found a lot of interesting things mostly on the opensource tracks. The "free java" track IMHO was a bit unpopular even though Stephen Chin and Mark Reinhold were there.

I guess I'm used to a better treatment on a conference (I go mostly as a speaker). Here it was rainy and cold and even though the french fries were awesome, I'm used to better food. 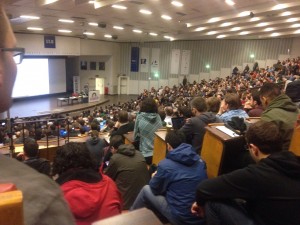 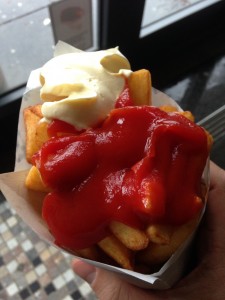 This is a tiny tutorial on how to build your own copy of OpenJDK 9 from the current sources.

Install brew or macports. I prefer brew. Both are package systems for OS X.

ccache is a compiler cache - speeds up the build.

We need them so we have a C compiler and other tools.

Get the sources, in the console type:

Takes 10-20 secs. This downloads basically a couple of scripts that we will execute to get the actual sources.

Now we execute the script we downloaded:

The last command can can take 10-20 minutes depending on the connection speed.

The second command took a bit less than 20 minutes. The first command is fast.

The result: we have this created:  build/macosx-x86_64-normal-server-release/images/jdk/ - this is the built OpenJDK 9 - SUCCESS. 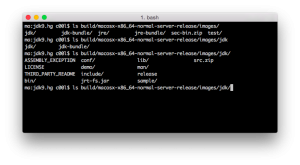 jtreg is a "testing harness" (whatever that means) made specially for OpenJDK. We need it to run the tests written for the OpenJDK

Download from https://adopt-openjdk.ci.cloudbees.com/view/OpenJDK/job/jtreg/ (not the Snapshot version, the other one).

unzip in jdk9, so we have jdk9/jtreg.

The official instructions suggest we edit ~/.bashrc. I don't like changing global (for your user) settings, so we can put these settings in jdk9/.bashrc

NOTE: Change /Users/steve/jdk9/ with your folder on the top line.
NOTE: Check the correctness of PRODUCT_HOME too.

To execute this file, do:

Webrev crawls over your changes to generate a set of web-based views of the differences in your code. The different views allow reviewers to easily look at your proposed changes, selecting the appropriate difference format based on the type of file, the type of change, and their own preferences.

To prepare a webrev, make some changes. For example in the jaxp folder. Then we commit locally in the mercurial repo.

It will prepare a webrev/ dir and webrev.zip. The folder is then uploaded somewhere and sent to the appropriate mail list inside openjdk. Example:
http://bgjug.sty.bz/bgjug/~bgjug/fix-warnings-jaxp-part1/webrev.00/

On a linux/unix/osx box we start with:

Notes: List is still not parameterized with because ... issues.

Problem1: My printer's scanner does not work over the wire with OSX. So the scanner part works by cable only. Well what if I put the usb cable over the wi-fi? Well, now I have a wireless scanner.

Problem2: I have a remote backup drive that I want to keep bootable and encrypted. Was it possible before this? I couldn't make it work. Is it possible now? I think so.

VirtualHere is a commercial software. For free it allows one simultaneous device, if you disconnect the first, you can use the second. It works flawlessly.

Its server has builds for most linuxes plus OpenWrt. The client is very simple, builds for osx, win, linux.

There are FOSS alternatives. If anyone has tried them, please share some info.

Here are the basic commands to talk smtp to gmail.

If you're using Gmail's two-step authentication

Ending the DATA of the email.

To end the DATA part, we need to press dot (".") and then Enter (which should send CRLF).

Important NOTE: I'm on a macbook, and the terminal client sends LF when I press enter. When I want to send CRLF, I press Ctrl+V, Enter. If you don't know what I'm talking about, after the dot (".") if it doesn't work with dot and Enter, press [dot, Ctrl+V, Enter].

We will use S_client which is like telnet, but supports SSL (encrypted telnet). You will need OpenSSL for that purpose.

(here you need to start with HELO, and then AUTH LOGIN - I don't know why)

Also, some accounts fail with:

I don't know why. It seems like it wants to fall back to ssl3.

I recently had to fix a changed Administrator password on a Windows Vista (most probably by malware, it disabled all admin users and changed passwords).

One can only use the Ubuntu Desktop installer with chntpw, but it is large and it's pointless to use it for this task. I found a very simple distro to use for the same task.

There is one tool I would not recommend: Ophcrack. It is supposed to "hack" (actually an unoptimized bruteforcer). I couldn't find a way to just "change" the pass. It didn't have chntpw bundled.

For quite sometime I've been hosting some stuff at home. It's quite simple - a second hand small-form-factor machine from Compaq, home internet and a router/switch.

Compaq machines are were small and very very quite, they just don't break at all. The first machine that I used for hosting had 7 (seven!) fans some of which we very noisy. No keyboard and no monitor. A small ups and it's good to go.

Hosting stuff at home is extremely cheap - internet that would have been bought anyway. The machines are also very cheap - my blog was running on a Pentium III, 800 Mhz and the machine was running Windows Server 2003 with the blog being .NET application. It's a little load on the electricity bill but that's hardly a show stopper.

A good wi-fi router would do the job of connecting all machines and provide internet for everything in the house. Most new routers have enough juice to support a linux - I've mentioned OpenWRT. If one wants to go crazy one would move a *nix machine in front of the router (two ethernet cards needed), because the router could easily go down.

At first it's very interesting. There are different OSes to configure, building an internal dns, dhcp, port forwards, certificates, sharing. There are a lot of things to learn.

But at some point all this becomes cumbersome - different OSes to configure, building an internal dns, dhcp, port forwards, certificates, sharing. Every single thing takes so much time and so much effort. And the bad thing is that this is a hobby, I'm not a systems administrator.

When I wanted to learn something new there was always twice the effort - once for administration (installing, configuring...), twice for the thing itself. Having stuff hosted somewhere else one does not care about all that. Just click install, or ftp and copy and that's it.

Sometime ago I decided to put a stop to all that. Hosting is so cheap now and the most valued thing (this blog) was the first to go to some distant server. It took me a couple of days but it worked. The old and frankly very stupid personal site I had got killed - after all simplifying is good right?

I've had so many computers, at some point I've owned 4 to 5 machines. I don't think that's necessary. I intend to get rid of all of them and have a nice 802.11 N router with an optical internet and ups.

So it was fun and I learned a lot but it has to end.

An amazing article on the basic differences between BSD and Linux. The author is a FreeBSD user, so one could expect the bias, but anyway a must-read.