Today I had to share 13 GB with ~10 people, and I had to do it quickly. I thought of many options - ftp (it would take a while), usb flash drive - even worse.

I thought of the P2P capabilities of the torrent technology. How hard can it be?

Starting a local server couldn't have been easier. I used Tomato Torrent: 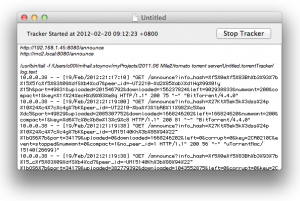 There aren't many options, the defaults are good enough. To share the torrents initially I used Transmission. uTorrent for some reason refused to share the files or it was too slow, I don't know. 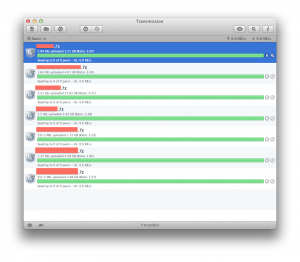 The torrent server even has a very basic web interface that doesn't tell much, but it is helpful:

13 Gb transmitted to  ~10 people in a 100mbit LAN network in less than an hour. And my machine didn't take that much of a performance hit. I worked during that time.

NOTE: creating the torrents as private somehow made sharing faster. I don't know why. But it did.

Xmarks is the name of an old plug-in for Firefox called Foxmarks. Foxmarks is used to synchronize bookmarks to/from different browsers. When the guys made plug-ins for different browsers I guess they changed the name. Now it supports IE, Firefox, Safari, and soon Chrome.

Anyway it’s super useful, it’s free and it’s relatively stable. When you somehow override the new bookmarks with an old version (I happens a lot) it’s easy to restore from the browser (Firefox backs up bookmarks regularly).

I’m using one account for me and it’s ultra logical to create one for the office – now everyone has all the new links.

Also if someone is too paranoid, the plug-in allows to use a custom (own) server, which, if I remember correctly, was just a Web-DAV (or FTP) directory with some privileges, but when I tried it (a couple of years ago) it didn’t work that well.