When I was a kid I wanted the biggest and most complex Legos. I only got small and cheap ones. The series I liked the most were the Technics.

Last winter I was dragged into a kids store. I saw a large box with "Lego Technic" on it. It was a crane with motors and everything. It was quite expensive.

When I got home I couldn't stop thinking about it. Google quickly returned all the results for "the best lego technic ever". Unanimously the answer was Technic 8880: 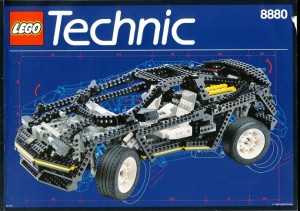 This was the most complex lego ever. It had a REAL gear box with four gears, independent suspension, 4x4 with three open differentials, V8 engine with cylinders and everything. 4-wheel turning. One could study car internals from this toy.

It was said to be the most complex to assemble, due to the scarce instructions. Even though the instructions were 51 pages. Here's a video:

was that this was a 1994 model and was discontinued. So I had to buy a second hand from ebay/amazon. Unopened boxes went as high as $1000.

After 3 months of searching and bidding I found a 14-year-old kid from Germany, that didn't speak a word English. After a lot of trouble with paypal (the kid didn't know how to use it) I finally got it.

It took me 14 hours, even though it said 7 on the box. I had to wear knee pads so that my knees wouldn't hurt so much.