Here’s the first pic I have from the US: standing in front of Grand Central station 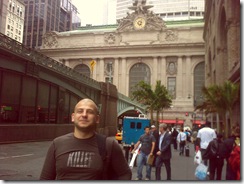 Couple of days ago i was in New York and stayed there for a few nights. The first two nights I stayed in Manhattan (2nd ave) pretty close to Central Park. The first time I went there it was raining for 20 hours so obviously I didn’t enjoy it much. I had to stay the whole day with my shoes being wet.

The next day I walked on my own and here’s what I saw: the NY fire department 🙂

The first evening the roommate of one of the friends had a birthday and celebrated it in East Village. It looks a bit like Amsterdam.

This is Ivan and I in front of a building in which the outdoor scenes of Vanilla Sky with Tom Cruise (if I’m not wrong) was filmed. That day it was raining, I was 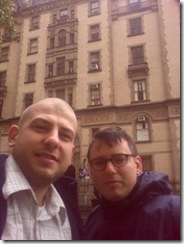 wet, he was late and both of us were really hungry. That’s why we’re not so happy.

It was a pretty sleepless stay. We broke in in the Russian Tea Room restaurant (2nd floor was closed) to make pictures with the giant crystal bear (it was 2 meters tall). Then being with t-shits went to the ball on the 3rd floor and made pictures while on the dancing floor.

The cab drivers all seem to be Pakistanis and they all seem to have taken the driver’s license by change. They don’t care how comfortable one feels. The cars most of the times are some old Fords which seem 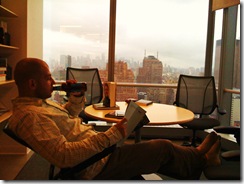 like 10 years old. The driver is separated from us with a glass. They have this touch screens on the glass that airs commercials or have a map with where the taxi is at the moment.

This is the World Trade Center 7 building which was rebuild after it fell on 9/11. I can be seen having a beer on the 27th floor on a working Friday in the office of Company magazine (Erica, correct me if I got the wrong name). 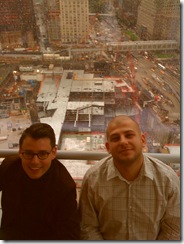 The one on the right is with Ivan. Behind us is the construction site on Ground Zero where some really big building is supposed to be built.

(I have to write more text, otherwise the pictures fail to display correctly, so this is my filling text 🙂 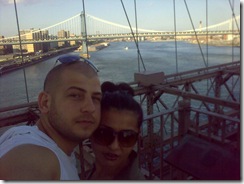 This one is from the the tour we made around NY with Silva. We’re on Brooklyn Bridge.

I saw Times Square, Wall Street, Brooklyn Bridge, I dined beneath a skyscraper in the only restaurant where one could smoke. We all went in the nude beach in Long Island (called the Fire Island).

I’ve been to Queens and today I’ll stay in Brooklyn. I’ve seen the Queensboro bridge. Made fun of the cab drivers. Got pretty drunk.

This is the bear on the right. The picture is with pretty bad quality, but that’s the best my phone can do in the dark.

Maybe I should write a bit more to fill in the space that the picture opened. But I’m too tired to think.