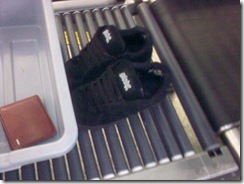 We just got on the plane to LA. And I just finished my fourth coffee. The flight attendant on the last flight asked me where I’m from when I asked for the strongest thing he had. Then told me a story about his stay in Sweden where some people laughed at him when he made something and called it coffee, they called it warm water. There wasn’t enough time to eat the Wendy’s salad I bought at the Phoenix’s airport, so brought some food on board. BTW, on these domestic flights they don’t serve food. The cheap bastards. On the last flight there wasn’t any food. Only some chips for 6 bucks.

On the left is a picture of these guys wanting to x-ray even my shoes. USA is such a police state. 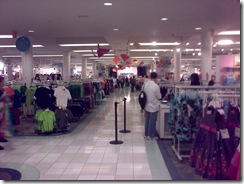 So NY. This is the third post for it. What more could be said about it? It’s crowded, it’s dirty. The metro, being 100 years old, is OLD and ugly. The asphalt on the roads is not that well made.

There’s the “grid system” which means that all street are perpendicular (and I’m talking only about Manhattan, because this is where I stayed). The streets parallel to the length of 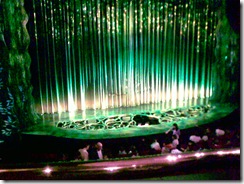 Update: On the right is Macy’s – the biggest department store in the world – it has nine floors, mostly girl stuff. There was only half a floor of men’s shoes. There were still something like 4000 pairs, but' that’s another story.

Oh, yea, we also went to Broadway and watched Shrek. It was amazing. The storyline was based on the first Shrek movie (or the other way around). The stage was something very hi-tech, because it was split into different parts that could move in circles and up and down. The costumes were very well done.  Did I say it was a musical? Yes it 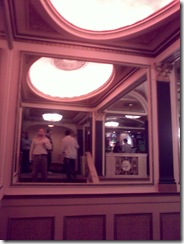 was. They were singing all the time, but there were so many jokes that it was pretty fun. We were first row on the terrace and I was prohibited to put my legs on the terrace itself. I so wanted to 🙁

The left is me having a jin and tonic in the intermission.

On the right is me on the 46th floor (the rooftop) of a building close to Empire State Building. And still ESB seems like going sky high.

That’s it from NY for now. Gotta go rafting.