In this first post I explained how Google Apps account were created to be incomplete (only docs, mail, calendar; no reader, groups, so on) and how I had to create a so called "Google Account" for my Google Apps account that would allow me to access all the google services. At this point this stopps working so I decide to migrate to a newer version of Google Apps that allows its accounts to access all google services. All this happens for my stoynov.com account.

So I start the migration and Google says that my new stoynov.com Google Apps accounts will be able access 62 new services and that I can stop some of them. I allowed them all.

Now it says that there's a conflict between my Google Apps accoung for mihail@stoynov.com and my "Google Account" for the same address. Here's what it says when I logged on gmail.com: 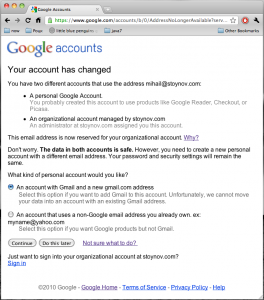 It seems that now my new Google Apps account takes precedence over my Google Account and the latter is now moved to a temporary address. It suggests I check these two links (Address No Longer Available and Not sure what to do?).

The stupid thing is that there's no simple "merge" that could provide a wizard and be done with it.

There are three options - create new gmail account, create new non-google account, do it later. Until then the temp address of the old "Google Account" is mihail%stoynov.com@gtempaccount.com.

Then I checked my google groups while logged as mihail@stoynov.com. Google said:

It comes out that Google Groups are not available for the Standard Edition of Google Apps. There seems to be a bug that's described here. For a second I thought that I'd lose access to all the groups and would not be able to receive messages. I quickly made a test. The mail came, so no access is lost.

So now I don't have access to groups.google.com, but at least my subscriptions go to mihail%stoynov.com@gtempaccount.com that redirects to mihail@stoynov.com.

Google messed this up and I intend to mail support so that I could be able to fix this somehow.

P.S. But even when/if it's fixed I would have to call all Groups admins to switch my subscription from mihail%stoynov.com@gtempaccount.com to mihail@stoynov.com.

Another ugly thing from that migration is the inablility to be logged to many mails simultaneously - before this migration I could be logged to mihail.stoynov@gmail.com, mihail@stoynov.com, mihail@work.com; today I can be logged to only one. And the nice "switch account" feature is not working. After going to google.com/accounts it worked:

At least that's working out 🙂

The last thing is the difference between the two profiles - mihail.stoynov@gmail.com and mihail@stoynov.com: 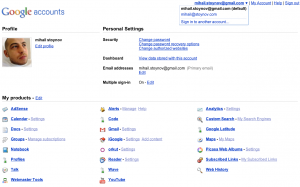 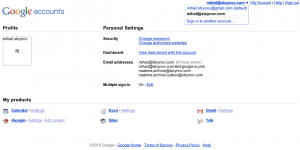 At some point Google suggested that I create a Gmail account for mihail@stoynov.com and suggested the address mihail.stoynov.com@gmail.com so that my "Google Account" would be "complete".

This was all working ok, even though it was really stupid, but at some point Google Apps' version of Google Docs didn't work ok with my iPhone and said that I have logged with the wrong account. And then I checked the admin panel of my Google Apps and it said something like "Google is changing, you can migrate your Google Apps to a newer version that would allow you to have access to all Google services. And I said, well finally. Google Apps should have been like this from the start.