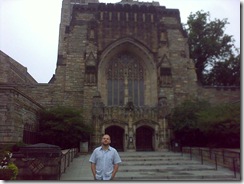 Meet Iva. Iva is a friend of mine and I’m staying with her in New Haven. Both of us will also travel through the US. After a few days in New York, we went to Chicago for the weekend (will try to write about it too) and now we’re flying to LA.

o New Haven. New Haven is where Yale University is. It’s a small and poor (in Iva’s words) town that has a pretty high crime level. On the right is some important building part of Yale, but God forbid I can’t remember what it is. Anyway. After landing in the US the first place I stayed was New Haven. Because of the time difference the next morning I woke up at 6:00 and had to be quite for 6 more hours and stay in my room because Iva doesn’t get up very early.

Since they don’t have internet I 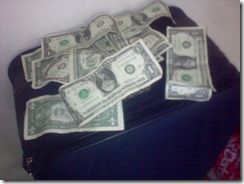 had to steal some from a nearby wi-fi router. The good thing was that in Bulgaria everyone was up so I had something to do.

When the trip around the US is over I’ll make some more pictures. Until then here a nice one – 20 one-dollar bills are drying after being in the washer.